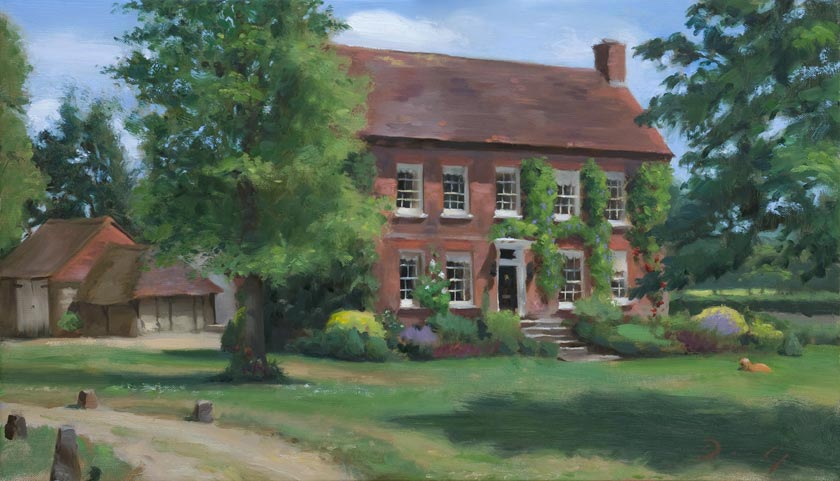 This painting was created over two days during my most recent portrait adventure in England, and it represents my first ever commission to paint a house. Crockham Grange is the home of Randolph and Catherine Churchill, and I’m happy with how it translated into paint.

Although I had already visited Randolph and Catherine several times before, I didn’t know their property well enough to approach this painting with a pre-made composition in my head. So I flew to England with three sets of stretcher bars – 14”, 18”, and 24”, and on my first night in Kent I stretched a 14” x 24” canvas and toned it lightly with raw umber and ultramarine blue.

I started this painting in late morning two days later, and I began with an umber block-in to avoid the sorts of drawing errors which can occur when I just dive in with color. 14” x 24” is larger than most of my alla prima work, and this is a fairly dense composition. Plus the morning sun shone from behind the house (throwing the whole front face into shadow), so I felt good about just pushing around brown shapes while I waited for the sun to move: I rarely begin this way with paintings that I intend to complete on the first or second day, since I generally don’t like fighting against the wet umber with my colors. Therefore I only carried this underpainting far enough to convince me that my basic shapes were reasonably placed. You can also see that I held back from massing in the larger trees on either side of the house. I think the picture above represents about an hour and a half of work, after which I went in for lunch.

By the time I came out again, the sun had come round, and I began blocking in my colors. Unfortunately, I neglected to take more photographs along the way, as I was quickly consumed with my work and rather nervous about how it was progressing.

My uneasiness probably stemmed from the amount of aesthetic decisions I had to make on the fly, many of which hinged on the weather. For one thing, the sun kept peeking in and out, and I had a difficult time deciding whether I liked the scene better in sun or in shade. Also, the sky behind the house was almost uniformly white, while the sky behind ME was light blue with cheerful little clouds, and I spent a long time wondering if I should try to superimpose the blue sky into my picture. In both cases, I sort of mushily split the difference, and decided to let the following day’s weather dictate the path that the painting would ultimately follow.

I worked for just under four hours that afternoon, after which the sun had moved beyond where I would want it to be. By the time I packed up for the day I had more or less covered my canvas with local color, experimented with handling some of the architectural details, and made a lot of mental notes for the following day. I then went inside to inspect my painting under indoor lighting and called my wife for moral support.

I woke up the next day intensely interested in the weather forecast. If the day was cloudy, I could actually work from about 11am until 8pm under *reasonably* consistent light (this is the great advantage of cloudy days). As it turned out, the sun prevailed, leaving me with little to do that morning but wait and contemplate my plan of attack. I started painting around 12:30 – even though the sun was still behind the house – so that I could work up some momentum before a quick lunch.

One of the keys to successful outdoor painting is to realize which elements of your scene are affected the most by changing light and which elements remain more constant. In my case, the shadows cast by the roofs onto the front faces of the buildings and by the trees across the lawn were most affected by the position of the sun. Meanwhile, the trees themselves and many of the plants offered a wider window of opportunity – especially the tree on the right, which was more or less in shadow the entire day. The sky also remained a relatively consistent powder blue, allowing me to pick and choose between slowly drifting clouds whenever they looked best. I estimated that my critical work would need to take place somewhere between 2:00 and 3:30. This actually worked out quite well, as it forced me to hit the ground running after lunch and quickly commit to my basic shadow shapes. I then spent the rest of the day filling in details based on a combination of memory and observation. I was also graced with a cameo appearance by Daisy, the Churchills’ Daschund, who thankfully stood around long enough for me to dab her into the lawn :)

In all, this painting took me about 12 hours over two days, which I hope demonstrates that plein air painting needn’t necessarily be a mad 2-hour race to catch the fleeting effects of sunlight upon a once-in-a-lifetime scene. Although my most critical patterns of light and shade needed to be captured within a 2-hour window, these patterns were laid in on top of a whole day’s worth of preparatory work. And they were followed by almost 4 hours of texturing, detail work, and edge variation.

When it goes well, making outdoor paintings like this feels like riding a wave: you pick a good spot, paddle out and wait around, paddle furiously for a brief crucial stretch, and – if you’ve set yourself up well – happily cruise to the shore for as long as your momentum lasts.