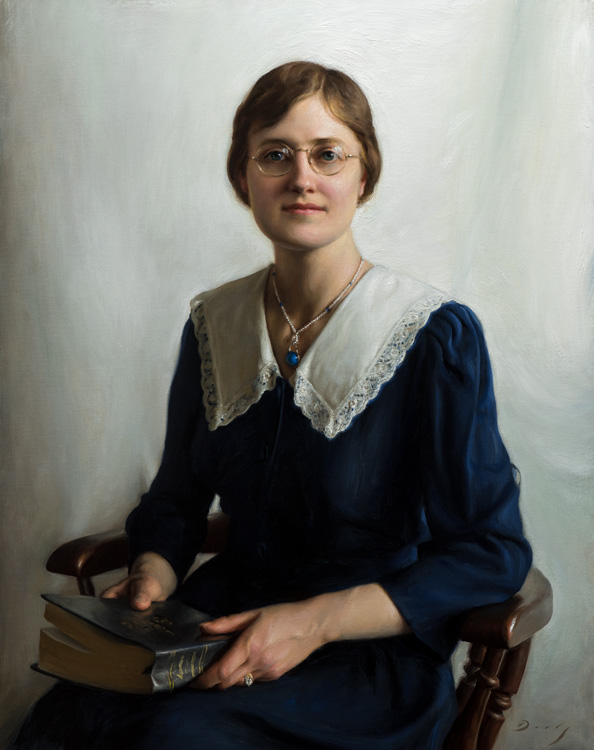 This year I had the special experience of painting Muriel Van Orden Jennings’ portrait for Princeton Theological Seminary. This portrait was quite an adventure compared to my typical commissions!

Muriel was the first woman to receive a degree from Princeton Seminary in 1932, and she passed away in 2000. As such, I would not have the opportunity to meet her, let alone sketch or photograph her face. I have traditionally avoided painting posthumous portraits for this reason, since I rely on my paintings resulting from direct personal experience with my subjects. But despite my reservations, every so often a project comes along that just feels like it is “supposed” to happen.

I was intrigued by Muriel’s story, and as it happened, when I was approached about her portrait I was already in the process of painting a posthumous portrait for the Children’s Hospital of Philadelphia. It was proceeding much more smoothly than I had anticipated – conspicuously so, to the point that I seemed to be receiving invisible help – and the response to the finished painting at its unveiling was incredibly moving. I also perceived an added gravity compared to my usual portrait commissions, as if the painting was in some way performing a service to the departed soul. These experiences made me open to the possibility of painting Muriel’s portrait.

“Dr. Pat Pasquariello”
Oil on linen
30ʺ x 40ʺ
For the Children’s Hospital of Philadelphia via Primarily Portraits

The driving force behind Muriel’s portrait was Mary Lee Fitzgerald – former student at Princeton Seminary, president of their Board of Trustees from 2005-2009, and resident of Montrose, PA, where Muriel had lived and taught for many years. I had recently started exhibiting paintings in Montrose at the Butternut Gallery, and the owner Betty Bryden put us in touch.

The first series of reference photos I received was – for a portrait painter – a meager selection. There was a nice headshot from Muriel’s youth, but it had the air of a yearbook photo and was shot in dual lighting that I did not resonate with. There was also a photograph of Muriel in her later years, accompanied by a video interview from the same occasion at Princeton, in which she recounted her experiences attending the Seminary:

I originally hoped that I could cobble together a painting from the later photograph and screenshots from the video, a prospect that my wife Maria deemed entirely too optimistic. However, in the time it took Mary Lee to secure approval for the portrait from Princeton and begin raising funds, she was also able to convince Muriel’s daughter to provide additional reference photos for the portrait. When Maria and I opened the envelope and saw this picture, we knew it was the one:

Still, finding the right reference photo left me a long way from arriving at a finished painting. This is a 4x7ʺ headshot from (I’m guessing) around 1940, and the painting was meant to be a life size, half figure, full color portrait. Fortunately, I am quite comfortable photoshopping heads onto bodies – almost all of my portrait commissions begin with some sort of beautiful, digital Frankenstein image before I ever touch my paintbrushes!

In this case, my living room window receives very similar light to the photograph, and Maria graciously posed for me in a dress given to her by an old friend, which seemed to fit the time period. Here is my main photo of Maria, along with the eventual composite portrait mockup on the right:

However, Maria has dark hair and olive skin, which was certainly not Muriel’s complexion. At first I thought I would be able to invent the color difference in paint, but I didn’t get far without needing additional reference. Thankfully, my friend Frances agreed to pose for some photos and a small painted head study … so the finished portrait is a mashup of Muriel’s head, Maria’s body, and Frances’ skin tones!

Here is a photo of my studio while I was in the heat of battle with the portrait:

Pictured from left to right are:

I also made use of my bible (altered from brown leather to black at the request of Muriel’s daughter), my mother-in-law’s glasses, and a diamond ring given to my wife by her grandmother (Muriel wore her engagement ring together with her wedding band).

As you can see, this portrait is very much a fiction, though based on fact, and I sincerely hope that it captures some truth about Muriel’s spirit. For my part, I am so much happier with the finished painting than I ever thought I could be when I was first asked to paint it!

The portrait’s unveiling at Princeton Seminary kicked off a three-day Women in Ministry Conference, with participants coming from all over the country and the world. How wonderful to unveil Muriel’s portrait in a dining hall full of women for whom she had paved the way! It was easily the most well-attended unveiling I have ever been part of, the first where I have been asked to speak, and the first to have been immediately preceded by an hour of worship. An evening I will never forget!

I am so grateful for the experience of painting this portrait – to Princeton Theological Seminary; to everyone who helped fund the painting; to Mary Lee for spearheading the project and giving me her full trust; to Muriel for making it all possible; and above all to God, for the gift of a conscious existence in Creation.