Behind the painting: “A Forest Path” 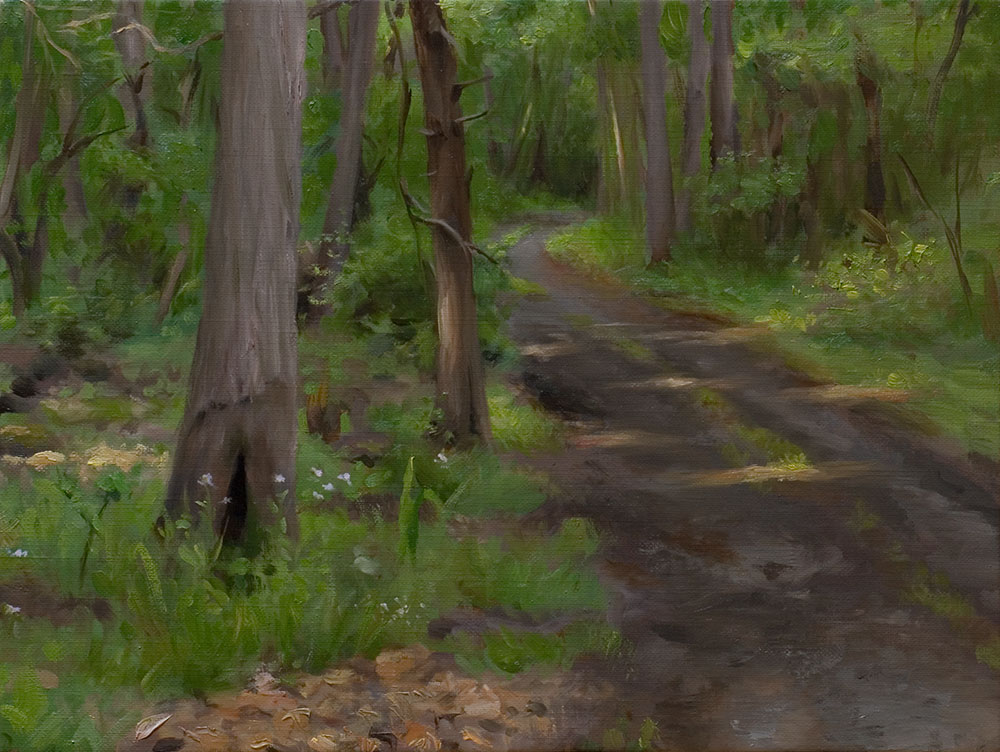 This painting is actually a view of Kathryn’s and my old driveway in Upper Black Eddy (Bucks County, Pennsylvania) … although at more than a quarter mile long, it certainly was a forest path! This represents one of my first attempts at beginning an outdoor painting in sepia, and it remains a good example of how I approach much of my plein air work.

At 16” x 12”, this painting was small enough to potentially be completed in one day, but I was nervous about getting bogged down trying to place my shapes and work out the subtleties of all that green at the same time. So I decided to break up the painting into several days of work and begin with a sepia underpainting: My sepia work is nearly always done with just Raw Umber paint and cold-pressed linseed oil on white canvas; I add paint for the darks and wipe it away for the lights. This probably took about two and a half hours – just long enough to be reasonably sure of the placement of my shapes and to get a bit of a feel for the various textures in the painting.

The advantage to this approach is that it allows me to block in a composition much faster than in pencil or full color oils. The only real disadvantage is that it can leave me with some annoyingly hard, dark edges to overcome should I need to make subsequent corrections in color (for me this is pretty much inevitable). For this reason, I have since taken to wiping down my underpaintings before leaving them to dry – lightening and softening the whole picture so that I can happily make corrections later without having to pile on the fresh paint.

In this case, I did struggle with a few corrections when I began my second layer a few days later … but my main hurdle was that the day I had scheduled to paint turned out to be completely cloudy, while my underpainting and original inspiration for the painting were in full sunlight! Outdoor painting constantly challenges the artist to make difficult on the spot decisions, and in this case I went through my usual process of pacing back and forth for half an hour and asking my wife what to do.

In the end, I went forward under the cloudy sky, since my first layer of color is rarely intended as a finishing layer. Sepia underpaintings tend to require a fair amount of covering up before the desired colors are reached, and I generally find this easier to achieve in two layers of paint. So I decided to use the clouds to my advantage and peacefully dabble away for the entire afternoon (overcast light is much more constant than direct sunlight, which I find offers me a 3-hour window at best before the sun has moved too much to continue working). I figured that with a strong color block-in I could happily change the picture back to a sunlit scene in my third and final layer of paint.

However … barely one hour into my work I was caught in a torrential downpour and thunderstorm! Since I was working only 10 yards or so from our garage door I had been able to setup a large picnic table umbrella for shelter, but I usually draw the line at lightning. Yet this actually turned out to be a blessing, as it forced me to simply block in the basic shapes and not get lost trying to prematurely render anything. My only goal was to cover up the sepia with color and get inside as fast as possible! Unfortunately, I don’t have a photograph of the painting at the end of day 2.

I began my third and final layer of paint three or four days later, after the second layer was dry to the touch. Again I was faced with a difficult decision, with cloudy weather and no sun in the forecast for the rest of the week … and again I hesitantly opted to go forward anyway, hoping once more for a long, peaceful, evenly-lit afternoon. Although my whole motive for making this painting in the first place was that I had been taken with a sun-drenched Summer scene, the woods had a different sort of beauty under clouds. Plus I was feeling pressed for time; the grass in the foreground was growing fast, and there were some little white flowers blooming that I didn’t want to miss.

And this time I got my wish and more … that afternoon I was able to paint for about four and a half hours under steady light, when all of a sudden the sun came out! In the woods, late afternoon sunlight can be quite special, as it often creates beautiful patches of dappled light while barely altering the overall lighting of the scene. I felt like I was receiving a wonderful gift: nature was literally lighting up my finishing touches before my eyes! I spent a joyful half hour laying in dabs of sunlight on my otherwise overcast painting, and the finished product was both different and more interesting than I had envisioned at the outset:

Once it was over, I realized that my journey with this painting was beautifully guided, despite my nervously questioning each decision along the way. Outdoor painting offers continual challenges in the form of changing & difficult conditions, but even under the relative control of studio work, I increasingly find that my success in painting hinges primarily on learning to perceive this guidance in the moment, and to follow it.