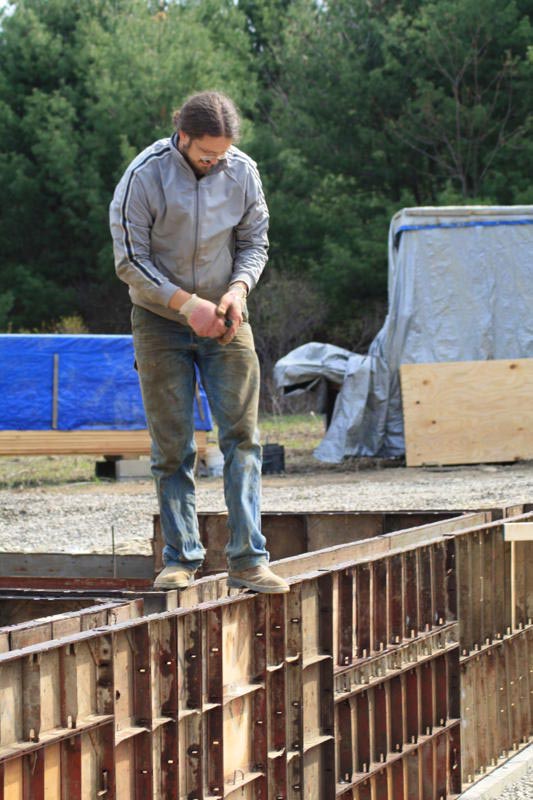 Week 2 of my mother’s house building involved more concrete work. We rented our forms from a very nice Indian man who had purchased them from a contractor John used to know. I started off the week in the “kitchen”, oiling forms and handing them off to John while he assembled them. Some of the pieces had quite an “antique” finish (to be kind), which meant that they just drank up the oil … these were absolutely some of the greasiest days of my life! On Wednesday John and I worked together, and through some very creative math on his part, we were able to use every last piece that the man owned! We also managed to avoid having to plug in any gaps with plywood. We weren’t ready for our hoped-for Wednesday pour, but we rescheduled for Thursday and everything fit together just fine.

The pour itself was slightly less physically demanding than last week … but no less hectic. John noticed only minutes before the trucks arrived that there was a 2′ discrepancy between his plans and the engineer’s, so he spent the rest of the afternoon worrying that we were building the house two feet too small! (The error turned out to be the engineer’s, and the house is NOT too small). The concrete in the first truck was also a bit wetter than John would have liked, resulting in quite a bit of pressure on our forms. Thankfully we escaped with just a few bulges here and there and no blowouts. And since the trucks could maneuver around better this week, no wheelbarrows were needed – just a few bucketloads here and there to top things off.

On Friday we peeled off the forms in a joyful and effortless two hours’ work, just as cooler weather and a nice rain set in to help the concrete cure. The concrete settled in very well without any voids, and the whole structure looks and feels great. Now after a good cleanup we’ll be able to put the sills in, which is an exciting step. Stay tuned!